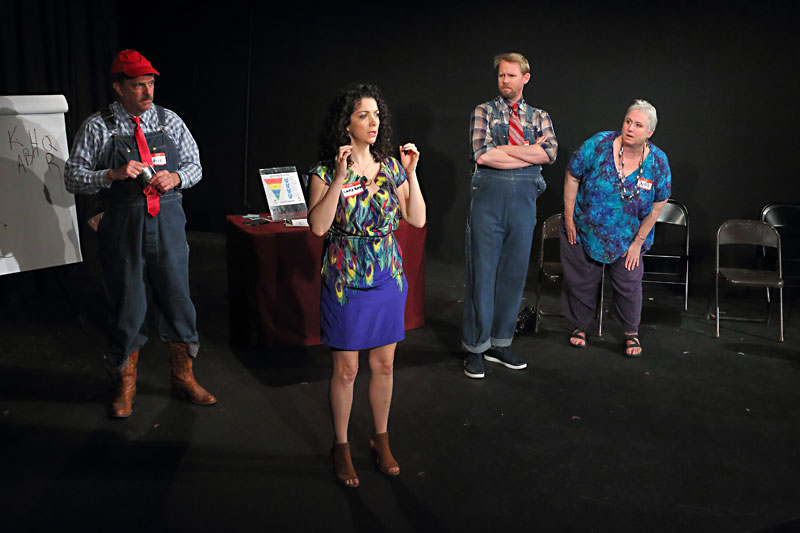 It’s the climax of Jason Rainey’s play, “Everyone Who Loves Me,” one of eight 10-minute works premiering at this year’s Out of Ink, ScriptWorks’ annual new-play showcase. Our protagonist Aaron (Matrex Kilgore) is about to receive some … let’s say, “unique” news. Thanks to the latest breakthrough in home DNA-testing technology – à la Ancestry.com – Aaron browses a list of everyone who is now (or has ever been) sexually attracted to him. Included are the names of childhood crushes, ex-girlfriends, and – alarmingly – his frumpy Aunt Connie. If you’re shifting in your seat already, buckle up; tonight’s lineup is full of similar pieces. Some are ridiculous, some are violent, and a few are unexpectedly emotional.

For this year’s theme of artificial intelligence, the playwrights of ScriptWorks spent 48 hours constructing dramas around three prompts: “1) at least one character who is artificially ‘intelligent’; 2) a decree defied, a law flouted, or a rule broken; and 3) a revelation, delivered too late.” Given the two-day turnaround time, the scripts understandably offer little in the way of subtext or subtlety (in many cases, the writer’s intention is stated outright). Not unlike an improv performer spontaneously creating scenes from audience suggestions, these playwrights must wear their narrative choices on their sleeves. The result is provocative ideas and concepts served raw, seemingly untouched by writers’ second-guesses.

Each lasting less than 10 minutes, the productions explore a diverse variety of subjects. Some play like a thought-provoking episode of Black Mirror. Trey Deason’s “Exemplary Service,” for example, showcases the unforeseen ramifications of technological advancement by way of an android barista (the model Tam4, aka “Tamara”) struggling humorously, then violently, with the nuances of human interaction. Other texts take a broader definition of artificial intelligence. Robin Anderson’s “Jackpot” sees a protagonist whose incessant bingeing on reality television leads to an overestimation of her own intelligence, creating strife between her and her partner.

Interestingly, the play that made the greatest impact on me didn’t employ the three rules as overt plot points, but instead as tools for telling a greater story. Nettie Rey­nolds’ dialogue-heavy “Detecting Obstacles” features the ruminations of an elderly widow haunted by the idea that if her late husband had been able to detect hazardously frayed pieces of carpet like her Roomba can, then he might have avoided the fall that killed him. With an impressive eye for realistic characters and dialogue, Reynolds’ portrait of grief felt full and realized, even with its brief run time.

Though the overarching theme of 2019’s Out of Ink is artificial intelligence, the plays – while often shocking and irreverent – offer personal reflections on what it means to be human. While this is my first time attending Out of Ink, I get the impression that this year’s criteria inspired its writers to venture exceptionally far into their imaginations and confront such personal fears as change, loss, and the unknown. Having sat through eight narratives, I feel as if I’ve engaged with each writer personally – even those who weren’t physically in attendance. After all, with only 48 hours allotted, the scripts produced can’t be readily shrouded in metaphor or molded by constant rewrites. These are creatives allowing themselves to be vulnerable so that they may share an honest, uncensored part of themselves.

Toward the end of “Everyone Who Loves Me,” Aaron decides to confront his Aunt Connie about her attraction to him. While excruciating, the dialogue between these two is ultimately healing, echoing the lesson to be learned from Out of Ink 2019: There are benefits to embracing that which sits just outside your comfort zone.

Out of Ink 2019: Artificially Intelligent