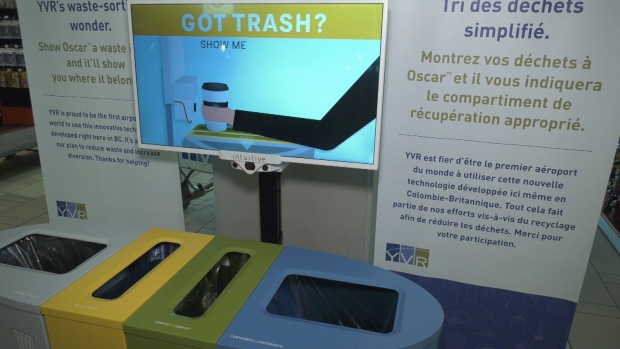 With nearly four million travellers already passing through the gates of Vancouver International Airport this year, one can imagine a lot of waste of waste can pile up.

Designed by Vancouver-based company Intuitive AI, the system uses a 32-inch display screen and an AI-driven camera to automatically identify recycling from trash.

It then instructs users whether their plastic containers can be recycled, or if their banana peels can be composted – instead of throwing them in the garbage.

“The airport has provided Oscar with an opportunity to constantly improve itself and nudge hundreds of travellers into diverting waste away from landfills every single day,” said Hassan Murad, Intuitive AI’s CEO.

According to YVR, the three smart bins powered by Oscar are the first to be used by an airport. They’re currently located located across from the A/B Pier Security station, opposite to the International Terminal Building Food Court and at the bottom of the SkyTrain escalators.

The airport says it’s the third year in a row it’s exceeded their goal.

“Aiding our passengers with waste sorting through artificial intelligence is an innovative way of improving the airport’s environmental footprint through technology,” said the airport authority’s senior environment specialist Shaye Folk-Blagbrough.

“We couldn’t think of a more innovative place than YVR,” added Murad.

In March, YVR came in sixth on internet-based travel company Netflights’ top 25 list for wellness in airports, and earlier this month Skytrax World Airport Awards named YVR for the 10th time in a row as the best airport in North America.