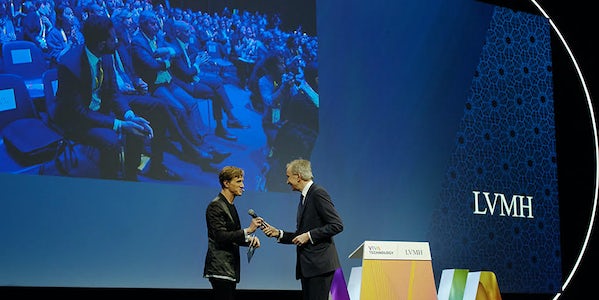 PARIS, France — LVMH has seen the future of fashion, and it is artificial intelligence.

The luxury conglomerate promoted multiple applications of the technology, along with other buzzy innovations like augmented reality and blockchain, at VivaTechnology. The annual technology fair, now in its fourth edition, is Paris’ answer to Las Vegas’ Consumer Electronics Show, providing a European platform for companies including Google, L’Oreal and Facebook to showcase their latest innovations.

On Friday, LVMH gave its Innovation Award to 3DLook, a mobile body-scanning app that uses AI and AR to take body measurements from photos. The idea is to ensure that shoppers buy the right-sized garments, reducing the number of returns for retailers. Founded in 2016, 3DLook already works with big fashion companies including Nike, but has yet to partner with an LVMH brand. The start-up receives a one-year membership to LVMH’s incubator at Station F, a Paris startup campus backed by French billionaire Xavier Niel.

“AI is going to affect everything we do,” LVMH Chief Digital Officer Ian Rogers told BoF.

LVMH also showed off a tool that will use blockchain technology to track goods in its supply chain in order to prove their authenticity. All Louis Vuitton goods will be certified “in the near future”, and that the technology will also be used for Parfums Christian Dior, said the group. The tool, called “Aura,” was developed in partnership with New York-based blockchain software firm ConsenSys using Microsoft technology. Paris-based non-profit Arianee, which boasts executives from LVMH rivals Richemont and Kering in its board, is also taking steps to launch a similar database managed by participating brands.

“We will then see how we can develop this technology in other aspects,” said LVMH Chairman and Chief Executive Bernard Arnault at a press briefing in LVMH’s packed booth. “We are at the beginning of all this; in the testing phase.”

This isn’t the first time LVMH has taken an interest in blockchain. Last year at VivaTech, VeChain, a start-up that develops blockchain information to verify the authenticity of a product, received a special mention during the Innovation Award ceremony.

Arnault noted that e-commerce generated €3.5-to-€4 billion in annual sales in 2018, or about 7.5-to-8.5 percent of the group’s overall revenue. This month marks two years since the launch of 24 Sèvres (recently rebranded as 24S), the group’s long-awaited return to multi-brand fashion e-commerce eight years after the closure of Eluxury.com, which launched in 2000 but suffered from strategic miscalculations.

Though LVMH products sell well on third-party websites, 24 Sèvres has struggled to gain traction. It ranked at No. 1,610 among fashion and lifestyle websites in April, according to Similarweb, compared with No. 38 for Farfetch and No. 154 for Net-a-Porter.

Through its alignment with VivaTech, the luxury conglomerate is attempting to position itself as a technology leader. The conference, organised by LVMH-owned media group Les Echos and advertising group Publicis, is slated to draw over 100,000 visitors and 2,500-to-3,000 startup companies this year.

France is home to leading luxury giants but has failed to birth many major tech or fashion-tech companies in recent years, with a few exceptions like luxury resale player Vestiaire Collective. French start-ups have raised a record €1.4 billion since the beginning of 2019, up 72 percent from the same period last year.

LVMH was battling for the spotlight with rival Kering, which played a prominent role at the Copenhagen Fashion Summit, announcing stricter animal welfare standards, a pledge to only hire models who are over 18 and the creation of a climate-change coalition backed by Macron.

For now, LVMH said it will not be participating in the climate coalition. Also this week, LVMH partnered with UNESCO to ensure the provenance of its raw materials.

“From what I understand it is an operation regarding fashion. The LVMH group is a bit of a fashion group, but it’s a lot more,” Arnault said. “We have more global concern on protection of the environment and sustainability for all our activities. We were the first to create an environment division over 25 years ago, dealing with all these issues in manufacturing and distribution, for example of our Champagnes, perfumes and cosmetics…. We have a more global approach to all of these issues, and we have had for a long time.”

Disclosure: LVMH is part of a group of investors who, together, hold a minority interest in The Business of Fashion. All investors have signed shareholders’ documentation guaranteeing BoF’s complete editorial independence.

Related links:
How Luxury Fashion Learned to Love the Blockchain

How Paris Can Grow its Fashion Tech Game?