Home  /  Project   /  Blog: How Artificial Intelligence Can Save Your Life – The New York Times

Blog: How Artificial Intelligence Can Save Your Life – The New York Times 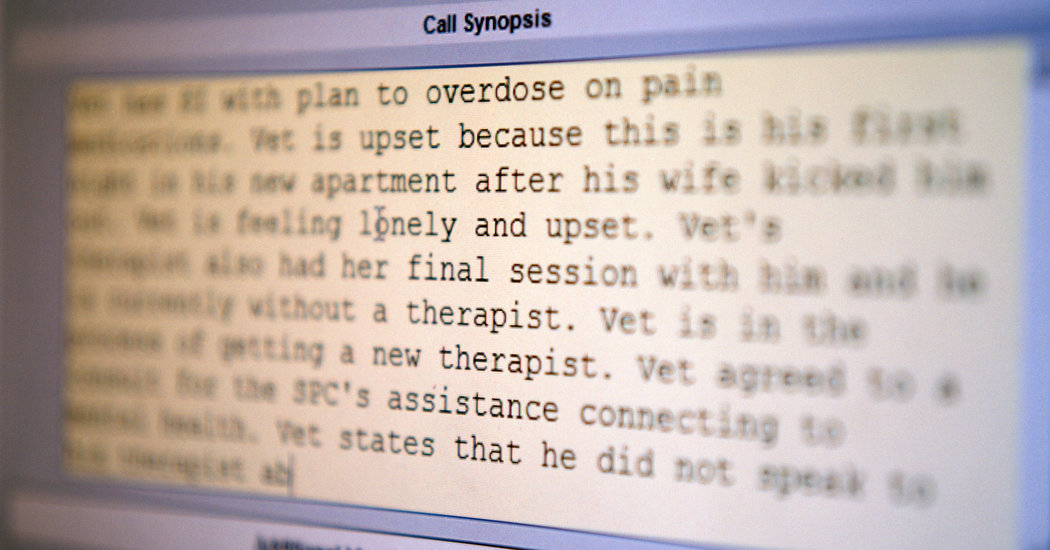 For an example of the last, researchers at the University of California, San Francisco were able this year to hook people up to brain monitors and generate natural-sounding synthetic speech out of mere brain activity. The goal is to give people who have lost the ability to speak — because of a stroke, A.L.S., epilepsy or something else — the power to talk to others just by thinking.

One area where A.I. can most immediately improve our lives may be in the area of mental health. Unlike many illnesses, there’s no simple physical test you can give someone to tell if he or she is suffering from depression.

Primary care physicians can be mediocre at recognizing if a patient is depressed, or at predicting who is about to become depressed. Many people contemplate suicide, but it is very hard to tell who is really serious about it. Most people don’t seek treatment until their illness is well advanced.

The Crisis Text Line is a suicide prevention hotline in which people communicate through texting instead of phone calls. Using A.I. technology, the organization has analyzed more than 100 million texts it has received. The idea is to help counselors understand who is really in immediate need of emergency care.

On its website, the Crisis Text Line posts the words that people who are seriously considering suicide frequently use in their texts. A lot of them seem to be all-or-nothing words: “never,” “everything,” “anymore,” “always.”

Many groups are using A.I. technology to diagnose and predict depression. For example, after listening to millions of conversations, machines can pick out depressed people based on their speaking patterns.

When people suffering from depression speak, the range and pitch of their voice tends to be lower. There are more pauses, starts and stops between words. People whose voice has a breathy quality are more likely to reattempt suicide. Machines can detect this stuff better than humans.

There are also visual patterns. Depressed people move their heads less often. Their smiles don’t last as long. One research team led by Andrew Reece and Christopher Danforth analyzed 43,950 Instagram photos from 166 people and recognized who was depressed with 70 percent accuracy, which is better than general practice doctors.

There are other ways to make these diagnoses. A company called Mindstrong is trying to measure mental health by how people use their smartphones: how they type and scroll, how frequently they delete characters.

In his book “Deep Medicine,” which is about how A.I. is changing medicine across all fields, Eric Topol describes a study in which a learning algorithm was given medical records to predict who was likely to attempt suicide. It accurately predicted attempts nearly 80 percent of the time. By incorporating data of real-world interactions such as laughter and anger, an algorithm in a similar study was able to reach 93 percent accuracy.

I had a chance to interview Topol last weekend at the Aspen Ideas: Health conference. He emphasized how poor we are at diagnosing disease across specialties and figuring out when to test and how to treat. When you compare a doctor’s diagnosis to an actual cause of death as determined by an autopsy, you find that doctors are wrong a lot of the time. Three-quarters of patients taking one of the top 10 drugs by gross sales do not get the desired or expected benefit.

Medicine is hard because, as A.I. is teaching us, we’re much more different from one another than we thought. There is no single diet approach that is best for all people because we all process food in our own distinct way. Diet, like other treatments, has to be customized.

You can be freaked out by the privacy-invading power of A.I. to know you, but only A.I. can gather the data necessary to do this.

The upshot is that we are entering a world in which people we don’t know will be able to understand the most intimate details of our emotional life by observing the ways we communicate. You can imagine how problematic this could be if the information gets used by employers or the state.

But if it’s a matter of life and death, I suspect we’re going to go there. At some level we’re all strangers to ourselves. We’re all about to know ourselves a lot more deeply. You tell me if that’s good or bad.

The Times is committed to publishing a diversity of letters to the editor. We’d like to hear what you think about this or any of our articles. Here are some tips. And here’s our email: letters@nytimes.com.

(Visited 3 times, 1 visits today)
By admin
in Project
0 Comments
Blog: This terrifying AI generates fake articles from any news site - The Next Web
Blog: Human Drivers Only. Get Your Kicks on 'Plastic' Route 66