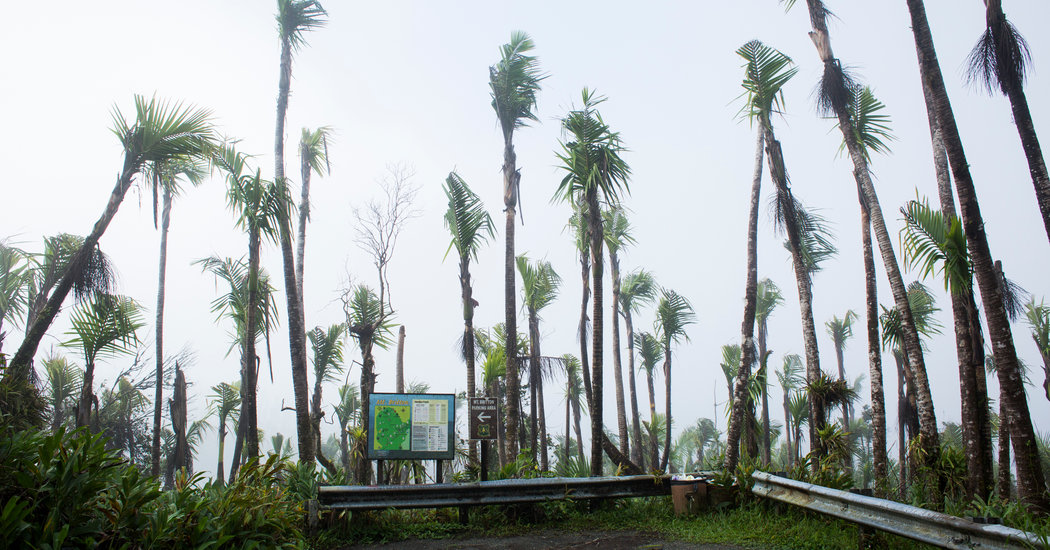 Maria Uriarte, a professor in the department of ecology, evolution and environmental biology at Columbia University, is trying to understand how Hurricane Maria in 2017 altered plant life in Puerto Rico.

But trying to identify which species of tree survived and which was destroyed over acres of rain forests by looking at aerial photographs is a near-impossible task for the human eye.

“The challenge with ecology as a field and climate change as an area is that the world is highly variable,” Dr. Uriarte said. “You can learn something about what happens in one place, but then the question is: How applicable is this in other areas that I haven’t worked at?”

That is why she has turned to artificial intelligence, and machine learning in particular, which is especially good at taking in large amounts of information, then sorting through it, classifying it and “learning” to detect — and predict — patterns with minimal human intervention.

Dr. Uriarte has mapped and identified the trees in certain areas. Using that data, as well as pre-hurricane photos, A.I. can then identify the species and show how it spread over the entire forest.

“We know in severe storms, there are clear winners and losers,” Dr. Uriarte said. “Some species suffer a lot of damage and some don’t. Over the long term, the winners would become more dominant.”

One winner is a certain palm tree, the Sierra, that is very resistant to hurricanes, and Dr. Uriarte is trying to determine where and how it spread over 28,000 acres of El Yunque National Forest as a result of past storms.

There are numerous consequences of the rise of this particular palm, including how much carbon is stored (and then emitted) and how water and wildlife are affected.

“What A.I. allows us to do is address this question at a scale that is not feasible using the traditional approaches,” Dr. Uriarte said. “It has tremendous potential.”

That is why researchers from industry, academia and government agencies are using artificial intelligence to help repair the problems of extreme weather events such as hurricanes, flooding, drought and wildfires.

Take the problem of more and longer-lasting power failures, caused in part by the increase in severe weather and more variable use of electricity because of new technology such as electric cars. Erratic energy use puts more strain on electrical grids and makes it more difficult to put utility crews in the right places at the right time.

While utilities have software available to help plan for daily and future operations, they are not as “smart” and dynamic as are needed.

Enter the Grid Resilience & Intelligence Platform project, known as GRIP. Its goal is to apply machine learning to the power grid by using large amounts of satellite imagery, weather data, smart meter data and other information about utility operations to find and fix problems, such as trees’ growing over power lines, that could cause trouble in storms.

The idea is to “anticipate, absorb and recover from events that cause grid outages, such as extreme weather or a cyberattack,” said Ashley Pilipiszyn, GRIP project lead and a Ph.D. student at Stanford University.

The project is co-led by the SLAC National Accelerator Laboratory, which is operated by Stanford University, and the Lawrence Berkeley National Laboratory, managed by the University of California. Like many such initiatives focused on artificial intelligence and climate change, the public and private sectors are involved in supplying research and funds.

In the case of a failure caused by a winter storm, for example, Ms. Pilipiszyn said that a smart grid could prioritize different electrical loads into islands and isolate faults, ensuring, say, that a nursing home or hospital receives top priority.

GRIP is a three-year project, and field demonstrations are expecting to be up and running by the end of 2020, Ms. Pilipiszyn said.

But as much as artificial intelligence holds great promise in understanding and combating the effects of climate change, it should be seen as only one tool of many, said James Hodson, chief executive officer of A.I. for Good, a nonprofit based in Europe and North America.

“When we get more people involved in machine learning to tackle these problems, it’s more likely we’ll find solutions,” he said. “But the reality of climate change is that we need social solutions — the ways we lead our lives, spend government money and the ways we force corporations to act better.”

Artificial intelligence is also playing a crucial role in agriculture.

In Australia, for example, warmer weather and a decline in rainfall because of climate change has caused a significant drop in the production of wheat and other crops such as canola and sugar cane; the country contributes about 12 percent of the total wheat traded globally, according to its federal scientific research agency, the Commonwealth Scientific and Industrial Research Organization. And the decline is coming at a time when more food, not less, is needed to feed a growing world population.

One of the ways to attack this problem is to genetically modify the crops to increase genes that are stronger in yield, quality and disease resistance.

Artificial intelligence and machine learning come into play here as a way to do this much more rapidly and effectively than humans. While an enormous amount of agriculture information is already available, the trouble is in analyzing it.

“Ten years ago, I would have been crying in the corner at the thought of how to analyze all the data that is coming online,” said Ben Trevaskis, who works for the research agency. “There is no way we can ever do this manually.”

Using data such as the genetic history of Australian wheat varieties, artificial intelligence can decipher the relationships between genes, growing conditions and crop performance. It can then rapidly combine thousands of genes into different varieties. For example, there is a 12-year lag between the discovery of new genes and traits and their use. The hope is to reduce that to two or three years.

One Concern, a company based in Menlo Park, Calif., uses artificial intelligence to model and forecast the impact of hazards. It started up in 2015 and has two products on the market: software platforms focused on earthquakes and flooding that are tailored to specific geographic areas to predict hyperlocal damage.

One Concern’s flooding platform, released last year, allows customers — which include cities and the private sector — to predict the depth and flow of flooding on a block-by-block basis up to five days before a potential flood.

But “this model without action doesn’t do anything,” said W. Craig Fugate, chief emergency management officer at One Concern and former administrator of the Federal Emergency Management Agency from 2009 to 2017.

So, the company is also focused on helping to mitigate the destruction wrought by such floods. That means looking not only at specific structures, but also everything that supports them. For example, a hospital may withstand flooding or an earthquake, but if the water system that serves it or the roads that lead to it are unusable, the hospital can’t function. That is what happened with Hurricane Harvey in Texas in 2017, Mr. Fugate said: Hospitals survived the flooding, but the roads were impassable.

“Historically, we’ve always looked at last 100 years’ worth of data to make decisions about going forward,” he said. “But if you’re having record-setting events practically monthly, how do you start projecting the future?”