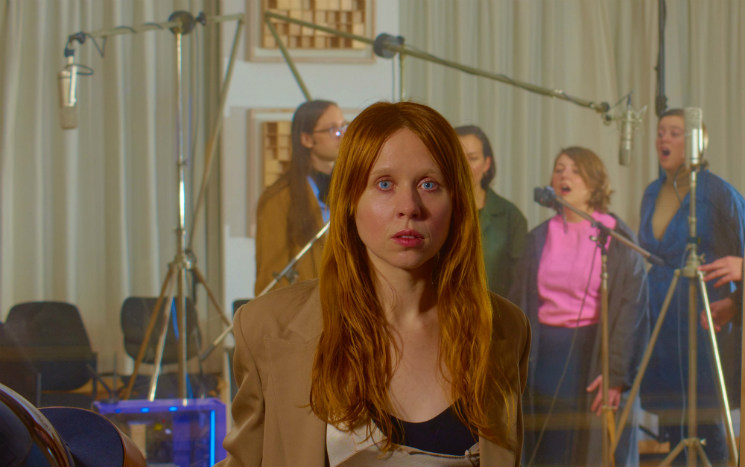 If it’s the end of the world as we know it,

As the culture races into the future, her new album

— the laptop auteur’s visionary third full-length — is casually situated at the precipice of the transhumanist paradigm shift, presenting work she created with the help of new artificial intelligence. Its name is Spawn.

at the end of March, Herndon tells Exclaim! she opted for machine learning instead because for her, MIDI and other alternatives provide “a very polished impression of where [A.I.] is at the moment,” while remaining limited to “this kind of cul-de-sac of rehashing and recreating from a given canon.”

Working with her partner Mat Dryhurst and coder Jules LaPlace, Herndon programmed Spawn with a special amalgamation of various machine learning techniques that allow the A.I. “to work with sound as material” and generate audio based on its provided input, refraining from MIDI data or any kind of automated composing.

With Spawn, Herndon wanted to provide an undressed representation of A.I.’s capacities, and while performances on

are often treated to Herndon’s characteristically intricate and complicated processing techniques, and it can be difficult to ascertain when Spawn is participating, the technology does feature naked and unadulterated in a few sequences.

“You can kind of hear the roughness and the fidelity of it, especially in something like ‘Godmother,'” Herndon suggests. At first a loose single released before the album was announced, the track was created with no samples, edits or overdubs, generated entirely by Spawn after the A.I. “listened” to

and attempted to mimic the artist’s post-footwork sounds through Herndon’s voice. Preserved precisely as the A.I. rendered it, the track sounds like a crude beatbox delivered through sputtered gasps and digital hisses.

“That’s one reason why we wanted to work with sound material rather than MIDI data — because I think you can really hear where the technology is at the moment — or at least what we have access to,” Herndon says. “I feel like you can hear the logic of the neural network inside the audio file itself.”

, that neural network extends beyond the system protocols Herndon, Dryhurst and LaPlace programmed Spawn with to the coding of the album credits. In Herndon’s ongoing effort to decentralize her practice, the cast of contributors she references range from vocalists and producers to thinkers that locate their work in fields like bio-computational experimentation or describe themselves as utopian graphic designers.

When asked how much she’s had to speak about Spawn after divulging the A.I. is only featured on about 30 per cent of the record, she sounds like she’s releasing a breath she’s been holding in all day.

“I love that people are interested and care about [Spawn] — but there’s also a lot of other stuff on the album,” Herndon states. “There are so many beautiful human intelligences that went into the making of the album.”

As a presence on the record, Spawn reflects the input of the collective, but only represents one voice amongst an expansive ensemble.

The A.I. also functions as a foil for the album’s larger exploration of the alienation (from others, our devices, ourselves, our projected online selves) we experience in relation to our increasingly connected world.

“I was really tired of spending so many hours alone in the studio,” Herndon says. “I kind of missed that — the immediacy of music and the kind of communal part of music-making.”

involved a cast of collaborators, Herndon primarily worked with them through online correspondence. For

, she established a vocal ensemble that assembled in Berlin.

“I think it’s a luxury good at this moment to be able to have an ensemble meet in person and go into a recording studio. I mean, it’s expensive and it’s time-consuming and it feels incredibly luxurious to be able to do that. Most of the things that I’ve done have been very inside my computer — and that’s also very liberating. So it’s not like a value judgment, it was like a craving.”

The experience allowed Herndon to conduct the devotional voices of her ensemble in real time, turning warm-up exercises into games and seeing how individual responses affected the group voice, eventually inviting the public to participate in a training ceremony in May 2018. A result of that session can be heard on “Evening Shades,” the public providing calls for Spawn to respond in kind, its warped, deflated answers dispelling any lingering fears of some imminent uncanny valley. Alongside “Canaan,” an unaltered live recording of an ensemble training session that doesn’t include Spawn, it also highlights how much the record depends on human input.

For Herndon, these transparent glimpses of process provide a pointed response to an ethical dilemma presented by the technology: “Corporations and governments have access to vast amounts of data often just given out for free by the public, and then are modeling or using that as their canon or their data set. What it does is it kind of makes invisible the human labour and the shared collective labour that goes into creating this technology. So that’s something that we wanted to make audible.”

The impulse stems from ideas Herndon explored on

she wanted to dig a layer deeper to explore the functions and implications of their underlying protocols, asking questions like, “How is that architecture structured in a way that allows the platforms that are built on top to have the kind of logic that they have today?” and, “If that protocol layer was developed in a different way, could the logic of the platform be changed?”

Herndon thinks these analyses can also be extended to the new technologies we develop and the ways communities interact with each other.

isn’t a perfect, horizontal-ized template for such protocols (“At the end of the day it’s not non-hierarchical,” Herndon admits; “I

actually writing music and asking people to inform it in a certain kind of way and getting their response.”), but perhaps it’s enough that it suggests an ethical path toward technological advance, prioritizing the voices that enabled it while reinforcing the bonds between them along the way.