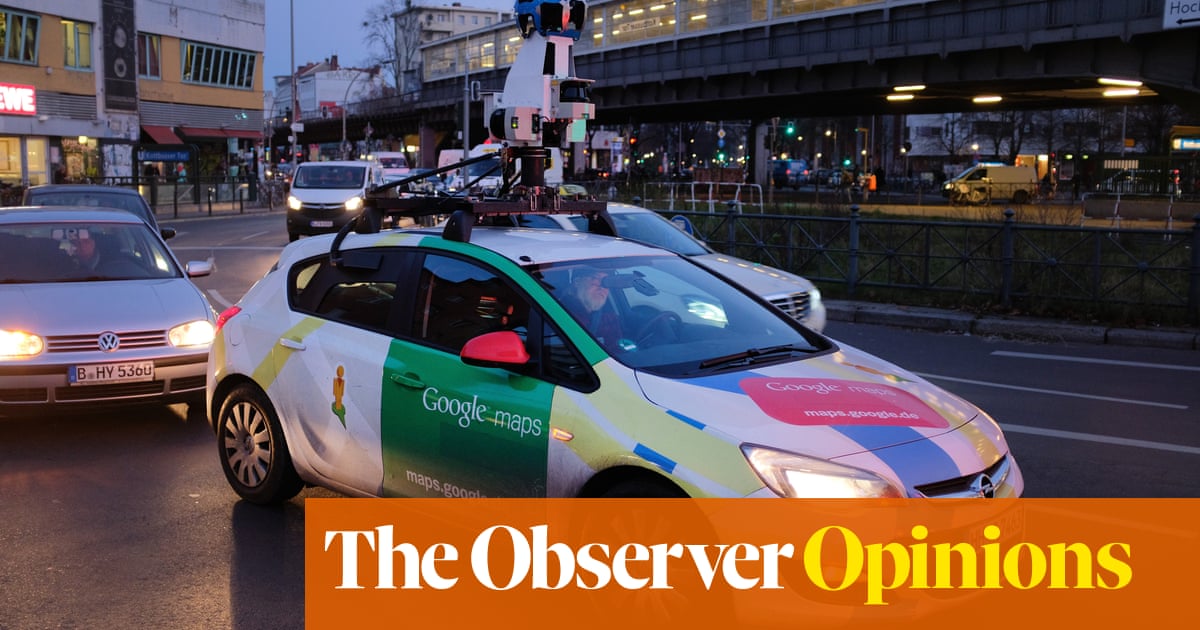 Google Street View is one of the wonders of the contemporary world. It’s a product of the arrogance, ambition, chutzpah and unconscionable wealth of a single corporation that decided it would photograph every street in the world and put the images online. When it was first announced, I was sceptical that it would amount to much – images of prominent streets in large towns and cities in western countries, perhaps, but nothing much more than that. And then one day I was wondering how to find my way to a friend’s cottage located in a remote rural area, looked it up on Google Maps, saw the Street View icon and clicked on it – and found myself virtually driving down the narrowest country lane you can imagine.

Street View was a product of Google’s conviction that it is easier to ask for forgiveness than for permission, an assumption apparently confirmed by the fact that most jurisdictions seemed to accept the photographic coup as a fait accompli. There was pushback in a few European countries, notably Germany and Austria, with citizens demanding that their properties be blurred out; there was also a row in 2010 when it was revealed that Google had for a time collected and stored data from unencrypted domestic wifi routers. But broadly speaking, the company got away with its coup.

Most of the pushback came from people worried about privacy. They objected to images showing men leaving strip clubs, for example, protesters at an abortion clinic, sunbathers in bikinis and people engaging in, er, private activities in their own backyards. Some countries were bothered by the height of the cameras – in Japan and Switzerland, for example, Google had to lower their height so they couldn’t peer over fences and hedges.

These concerns were what one might call first-order ones, ie worries triggered by obvious dangers of a new technology. But with digital technology, the really transformative effects may be third- or fourth-order ones. So, for example, the internet leads to the web, which leads to the smartphone, which is what enabled Uber. And in that sense, the question with Street View from the beginning was: what will it lead to – eventually?

One possible answer emerged last week with the publication of an intriguing research study by two data scientists, one based in Warsaw, the other in Stanford. Working with insurance companies, they analysed 20,000 addresses of the companies’ clients, collected a corresponding house image for each one using Google Street View and annotated the pictures of the houses, noting features such as age, type and condition. Applying machine-learning software to the data they were able to build a model that gave substantially better predictions of car accident risks for the householders than the models currently employed by the insurance companies – and which, of course, could be used to justify higher (or lower) premiums.

“We found,” the researchers concluded, “that features visible on a picture of a house can be predictive of car accident risk, independently from classically used variables such as age or zip code. This finding is not only a step towards more granular risk prediction models, but also illustrates a novel approach to social science, where the real-world granular data is collected and analysed at scale.”

On the face of it, this seems weird, does it not? What it appears to say is: “Show me your house on Street View and I’ll tell you how likely you are to have a car accident.” And of course it’s possible that deep in the mathematics of the paper there’s an error. (As far as I can tell, it has not yet been peer-reviewed.) Or maybe the sample of 20,000 was too small.

Either way, though, the paper provides an illuminating case study in the potential upsides and downsides of machine learning. What the technology essentially does is to spot correlations that the human eye might miss. But correlation is not causality, so one is always left wondering whether a particularly striking correlation is spurious or not. Does a poorly maintained dwelling, for example, imply that the resident’s car is similarly uncared for and therefore more accident-prone?

That seems a bit far-fetched to me. But if it turns out that what the two researchers found can be replicated and confirmed with bigger samples, what then? At the moment, car insurance premiums are partly determined by the postcode in which a vehicle is kept, which is why it costs more to insure a car in Liverpool than it does in Cambridge. But this amounts to a kind of postcode lottery – penalising careful drivers who live in poor areas and favouring roadhogs who hang out in leafy suburbs. Using Street View data might reduce such inequities by bringing things down to the level of the individual householder. On the other hand, it could stigmatise the conscientious tenant of a rented house owned by a stingy landlord or managed by a corrupt agent. So Kranzberg’s first law still applies: technology is neither good nor bad; nor is it neutral.

Boeing, Boeing, gone…
The fiasco surrounding Boeing’s 737 Max passenger jets is explained in one of the best pieces of technical writing I’ve come across – published on IEEE Spectrum.

Something wicked this way comes
A piece by Nitasha Tiku on the Wired website explores what happened to Google’s “Don’t be evil” motto. Need you even ask?

Where it all went wrong
WikiLeaks and the lost promise of the internet: a very interesting (and scorching) essay on the Lawfare blog by Quinta Jurecic about Julian Assange.